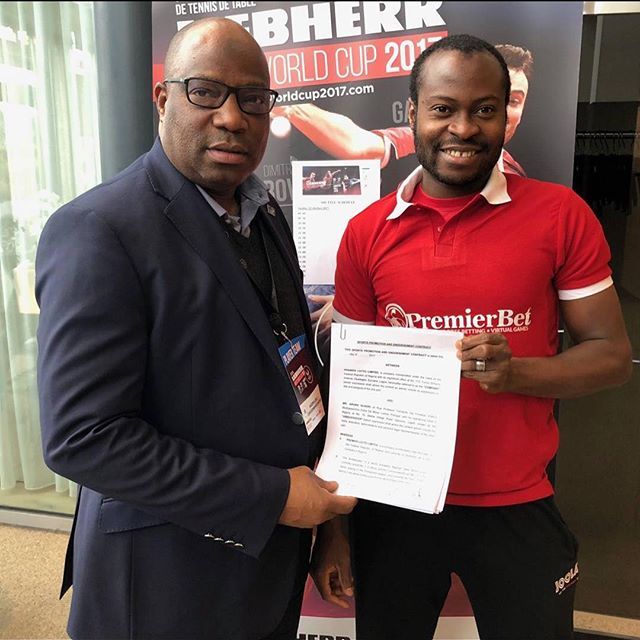 For more than 15 years, Wahid Enitan Oshodi has been supporting Aruna Quadri in his quest to be among the top table tennis players in the world. Oshodi, a former President of Nigeria Table Tennis Federation (NTTF) and the Chairman of ITTF Nomination Committee believes upcoming athletes need to take a cue from Quadri who has remained humble despite his rising profile.

How did you meet Aruna Quadri?

I met Aruna at the Abeokuta 2006 National Sports Festival. I was Chairman of Lagos State Table Tennis Association (LSTTA) then. It was a festival which allowed Professional athletes compete and in the table tennis event the Legend himself Segun Toriola was captaining a star filled Ogun State team including Bode Kayode, Lanre Aremu and Kazeem Makanjuola who had been members of the Lagos team but decamped to the host state Ogun. Having lost many players we took a young team made up of secondary school students from Lagos to gain experience. But the cynosure of all eyes was the very young mostly unknown boys’ team from Oyo State. They had a fantastic Coach and played with such skill and determination but lost the men’s finals narrowly with Toriola’s experience coming to the fore. Aruna Quadri was one of the young boys and I introduced myself to them and started inviting them to Lagos to play in tournaments and train with our Coaches.

What attracted you to him?

I think it was the fact that he was so very humble and he seemed so determined to do well. He wanted to move to Lagos to further his education at University of Lagos and this was a bit unusual for most table tennis players who just wanted to earn some money. His humility and the respect he showed to everyone around was so good to see. I remember even my coaches grumbled a bit about us helping him because he was not from Lagos and couldn’t represent us but I wanted the best players playing in my events and so I helped in ensuring he moved to Lagos for school and to help develop his game. At that time we had tournaments fortnightly and we brought the best players from all over Nigeria and even those who were abroad joined in when they came home for holidays.

What makes Quadri a unique athlete?

Humility and the hunger to be the best. Most top athletes have these qualities but in Quadri I found a player who had an extraordinary amount of belief that he would make it to the top and become a national team player.  Every time he lost in our events he came back stronger. Always willing to put in the work to learn and better himself across all spheres. Table tennis, school and life. He just wanted to keep improving. He always wanted to know how he could improve himself. He always bounced back from every setback and never got carried away with his success. He was not the most talented athlete of his age group but he was the most determined. Nigeria has so many vastly talented and gifted athletes but most of them just can’t couple the necessary hard work and discipline to take them to the top of their sport. Quadri has a bucket-full of those important qualities.

How will you describe the rise of Quadri from obscurity to fame?

For a player who was not such a great junior player his latter development was outstanding. He wanted to go on the Professional tour and needed a bit of help with the costs but I didn’t think he was that good then but a couple of people prevailed on me and I got a group of friends and table tennis lovers together who helped him. His first few trips ended in him getting beaten soundly but he would come back home very sad but very determined to do better and soon enough even I started seeing the improvements and the qualities that have made him a great champion now. In my first interview when I became President of NTTF I told the journalists that Quadri then ranked 500+ in the world would be a top 200 player within three years. Twelve months later he was in the top 100. Pure hard work and the support of his major sponsors Baba Ijebu Sports Bet also helped greatly. Then he moved to Portugal and with better coaching and facilities his improvement defensively and powerful attack shocked the table tennis world. The most powerful forehand in the modern game drove him to African cups, Portuguese titles, World Cup quarter finals, Professional tour titles and his performances at Rio 2016 beating Timo Boll, probably the greatest player outside China, set him aside as a superstar. His Powerful attacking style of play has endeared him to table tennis fans all over the world. We have had great table tennis players Like Atanda (Mansa) Musa, Kasali Lasisi, Segun Toriola and many more but Quadri seems to have taken the best attributes of these great players. Musa and Kasali’s exciting entertaining styles coupled Toriola’s hard work and discipline. He always wants to learn from the best. The reaction he gets from crowds and the way he lights up venues all over the world is such a delight to see. That’s what has made him the modern day sports and entertaining superstar he is. In 2019 Watching Quadri at the Teslim Balogun Stadium when he defended his Nigeria Open title before the fanatical Lagos crowd was one of the greatest spectacles of modern day sport in Nigeria. To be a top 20 ranked player in a sport like table tennis dominated by Asians and Europeans is no mean feat.  He is a pride to Nigeria and Africa. Our country needs to show more pride in him.

How far do you think Quadri will go?

I believe Quadri is a top 10 player. He is one of the few players in the world who has the class to win a World or Olympic title. If he has a good run in any tournament he could win it. He just needs to focus properly and he can do it as he has shown. He is capable of beating anybody in the world and he is now proving that consistently. The top players are always nervous because of his relentlessly powerful forehand and now that he has added a great defence and reliable backhand to his game I think we would soon see him in the top 10. His move to Germany, the premier league of world table tennis will also ensure he continues to progress. More sponsors are now making overtures to him and the financial stability that comes with being a top player will also help him keep his focus. Quadri is already a table tennis great but more importantly his performances are opening doors for a lot of talented young gifted Nigerian and African players. Professional table tennis is now a career choice for many due to his achievements.

What lessons can others learn from his story?

There is no shortcut to lasting success. Patience, hard work, discipline and respect for your sport and your body allied to talent will lead to the top. Quadri is at the top of world table tennis now coming a long way from Oyo. It is because he had managed to stay true to those simple qualities. Bouncing back every time you fail and keeping your focus on the prize is the way to success.