Save 70% on select product(s) with promo code 70XWS9BS on Amazon.com
by lordkinful
with no comment

Egypt’s Khaled El-Salhy has been reelected for a third term in office as the President of African Table Tennis Federation (ATTF) at the 2021 General Assembly held for the first time virtually by the continental body on Saturday, June 5, 2021.

El-Salhy who has championed the modernization of table tennis in Africa was elected unanimously by the 23 delegates that attended the well-attended assembly in the history of the federation.

An elated El-Salhy also assured the delegates of more innovation in the sport in line with the International Table Tennis Federation (ITTF).

Apart from the election, some vital decisions were agreed especially as it concerns the athletes as the delegates approved the use of the world ranking for seedings in continental tournaments, while delegates also approved the appointment of the Advisory Council chaired by Nigeria’s Oladapo as the Executive Council (EC) is expected to confirm. A four-year Strategic Plan of ATTF was also adopted by the delegates.

A delighted El-Salhy thanked delegates for the confidence reposed on him while praising to redouble his efforts with the new executive to improve the profile of the sport as well as continue to work with ITTF in giving a lift to table tennis in Africa.

Executive Vice President, ITTF Alaa Meshref lauded the past executives for laying the foundation for the growth being experienced in Africa while urging the new executives to build on their predecessors’ legacy. Meshref also reiterated ITTF’s commitment to Africa while expressing optimism on the future of the sport in the continent.

In his remarks, CEO of ITTF Steve Dainton commended the delegates for their efforts and commitment to table tennis, whilst also congratulating the new executives and thanking the previous executives for their dedication to the sport. He, however, encouraged them to continue to raise the bar of the sport in the region as ITTF would continue to support the continent more than ever before in its quest to popularise table tennis in Africa.

Dainton reaffirmed ITTF’s commitment and support to ATTF through its Master Continental Agreement and especially praised the ATTF for the adoption of their robust Strategic Plan at the General Assembly.

ITTF Secretary General Raul Calin commended the delegates for their conduct during the General Assembly while expressing optimism in the new executive led by El-Salhy to continue to improve the lots of table tennis in Africa.

23 countries, as well as more than 30 observers, were part of the General Assembly which lasted for over four hours. 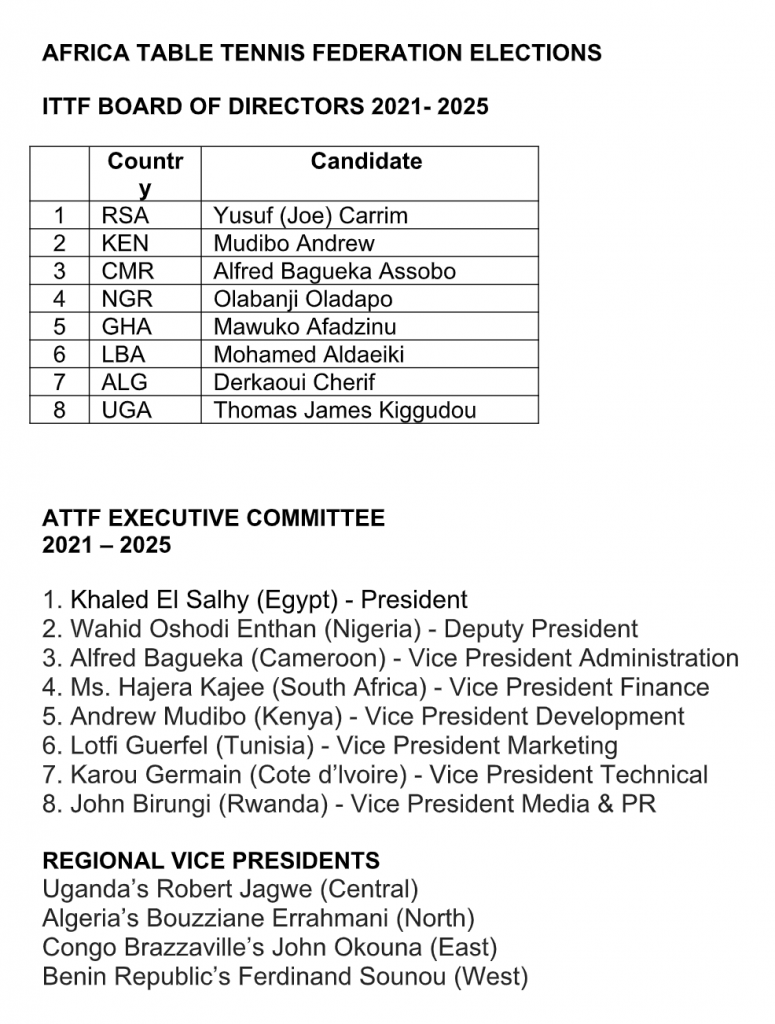