Ahead of the 2020 ITTF Africa Top 16 Cup in Tunisia, the African Table Tennis Federation (ATTF) has unveiled the seeding list for the $25,000 prize money tournament holding on February 24 to 26.

Nigeria’s Aruna Quadri and Egypt’s Dina Meshref have been listed as top seeds in the men and women events at the three-day tournament which serves as the continental qualifiers for the 2020 ITTF World Cup in Germany and China.

The 32 participants (16 men and 16 women) is made up of regional champions and top ranked players made the final list with obvious absence of Nigeria’s veterans – Segun Toriola and Olufunke Oshonaike. The Nigerian duo will be missing out from the competition for the first time in the last one decade having won the tournament in the past to represent Africa at the World Cups.

In the men’s seeding list, Nigeria’s Aruna Quadri who recently joined a German Club in the Bundesliga will lead the array of stars to Tunis, while defending champion, Dina Meshref leads the women’s contingent to the tournament.

From the seeding, Quadri and Assar will likely clash in the semifinal just like what panned out at the 2019 ITTF Africa Cup in Lagos with the Egyptian claiming a 4-2 win to eventual win the tournament. 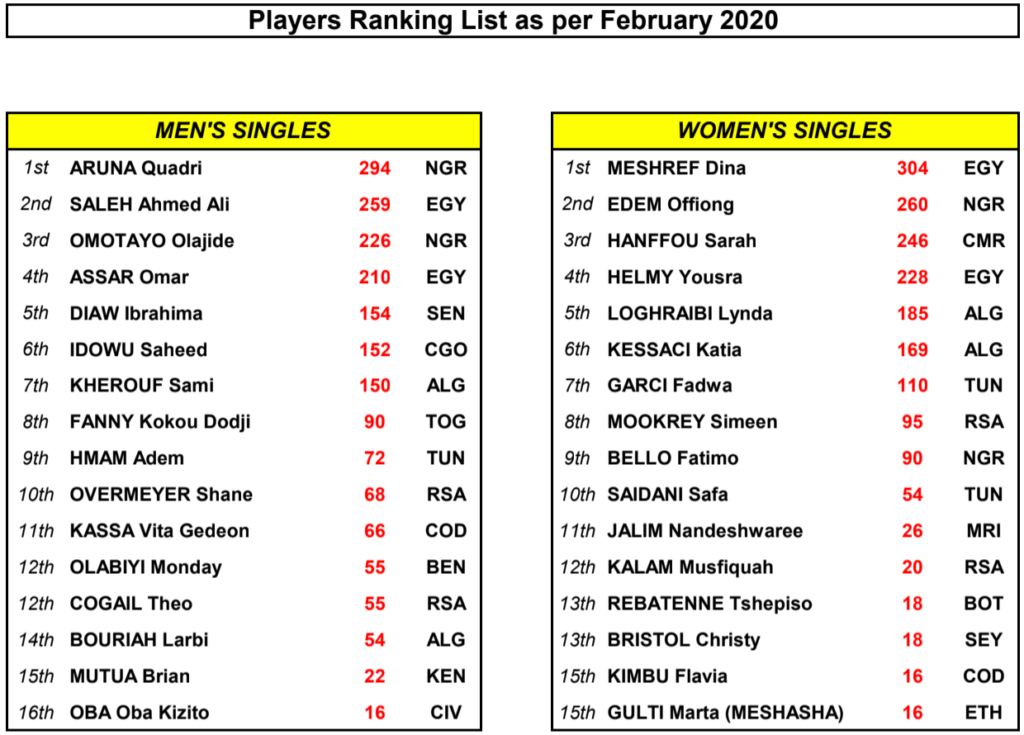 According to the format of play, both events (men and women) shall be played in a group of Round Robin System with four groups of four players in each category, while all matches will be played best of five games in the first stage.

In the second stage of the tournament, winners and runners-up of all groups will be drawn to play the knockout for all positions till the winners emerge.

The allotment of the players in groups will take place according to the latest African seeding list with the top four seeding players being drawn as headers of each group. The other seeded players will be drawn accordingly using the modified snake system in the groups two by two – The players not ranked, will be allotted by draw.

Also, players from the same country not to be drawn in the same group of the competition.

Winners in the men and women events will represent the continent at the ITTF World Cups later in the year.