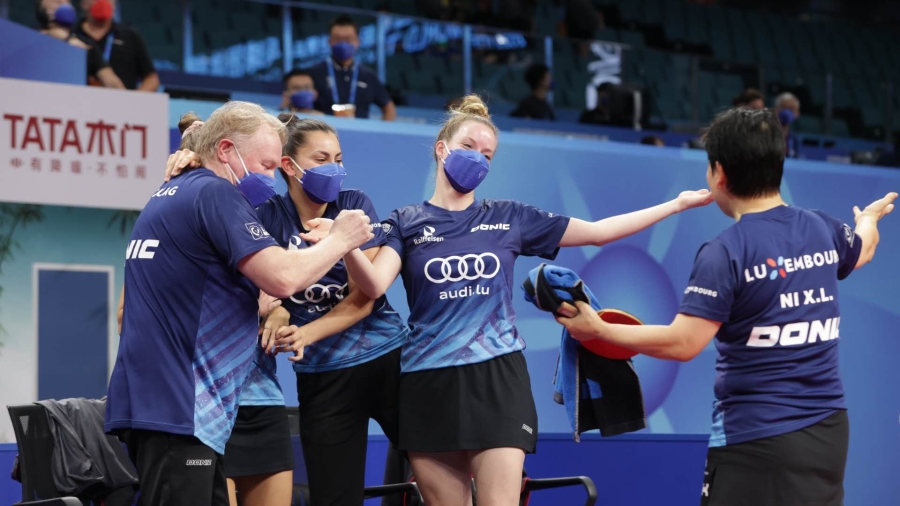 A four-year wait over, Ni Xia Lian sets alight the 2022 ITTF World Team Championships Finals Chengdu presented by China Telecom, spearheading a sensational 3-1 victory for Luxembourg against the Republic of Korea, the no.4 seeds, beating both Jeon Jihee and Lee Zion.

Ni Xia Lian commented, “We are very happy, and we are a wonderful team. Today’s victories belong to the team. Our team harmony is our key to winning.”

The one further success for the small European Grand Duchy was recorded by Tessy Gonderinger, in the third match of the fixture, she accounted for Kim Haeyong. Luxembourg was the outfit to upset the order of merit in the women’s event, in the men’s the distinction was gained by Poland; a 3-2 win was recorded against England, the no.8 seeds.

Both upsets came in the second session of play after proceedings had earlier commenced with officials taking center stage.

Surprise outcomes but for the remaining highly rated teams, required to enter the arena on the opening day of action, all emerged successful.

In the men’s event, of the higher seeded teams in action Germany, Japan, Republic of Korea, and Sweden all recorded 3-0 wins.

Dang Qiu, the recently crowned European champion, making his debut in the tournament, showed his class by recording a straight games success when facing Denis Zholudev in a 3-0 win against Kazakhstan.

“It is a big honor for us to play for the national team”, reflected Qiu. “We are all happy that we can represent Germany; we give our best every match, so we can fight and be proud to be Germany.”

Comfortable victories, for Brazil, the no.6 seeds, life was more testing. Wins for Hugo Calderano against  Martin Andersen and Anders Lind secured a 3-1 win in opposition to Denmark.

“I don’t think it was a perfect performance. There is no such thing, but I think it was a perfect performance from the team”, said Calderano. “I was able to win my two matches. I think the most important thing is that we don’t think so much about the level we play just to get the job done. The first match is very important for the team’s confidence.”

Success for the Brazilian men was the same for their women; sisters Bruna and Giulia Takahashi alongside Laura Watanabe combined to record a 3-0 against South Africa.

Convincing but for Puerto Rican sisters, Adriana and Melanie Diaz, life was more exacting. Opposing Malaysia, Adriana remained unbeaten, but the heroine was Daniely Rios; matters level, in the vital fifth and deciding match of the engagement, she overcame Ho Ying.

Sisters on duty, in the men’s event, making their first World Championships appearance, Alexis and Felix Lebrun remained unbeaten in a 3-0 success for France against Uzbekistan.

Further teams which will play their first match in the men’s event include Chinese Taipei, Czech Republic, India, and Romania; in the women’s France and India.

From 30 September to 9 October, the 2022 ITTF World Team Table Tennis Championships Finals Chengdu, presented by China Telecom see top players of 60 teams from 36 countries compete to win two of the sport’s most coveted prizes: the Swaythling and Corbillon Cups.