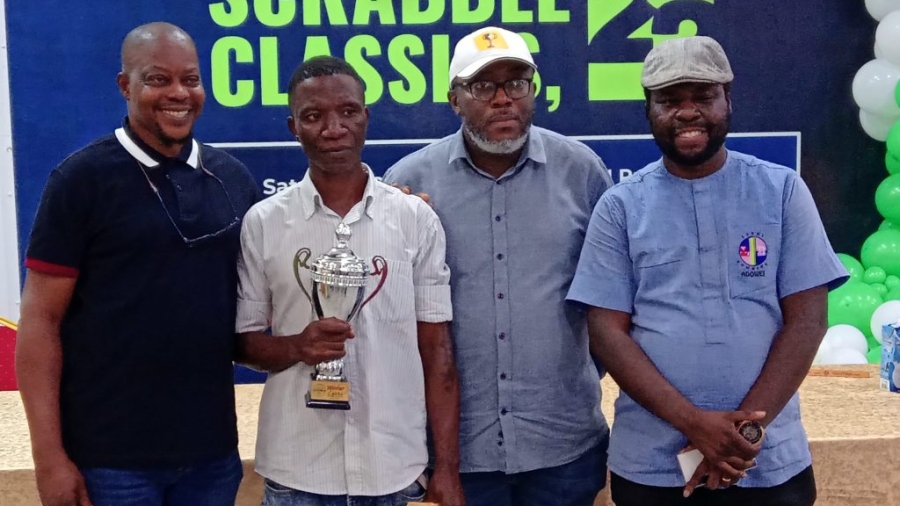 by lordkinful
with no comment
With an unusual smile playing across his face as he held the silver trophy high above his head, James Ewruje on Saturday confirmed his new status as the champion of the newly rebranded Lekki Scrabble Classics.
The Master player claimed the overall title and emerged the best among the 100 players who competed over 12 games at the one-day tournament.
Ewruje shrugged off the challenges of tournament top favorite Tega Okiemute of Delta State in the last round to cement his pole position on the log with 11 wins, one defeat, and a spread of 599 cumulative points.
The defeat would be costly as Okiemute tumbled to the fourth position at the end.
Ogun State-based Gbadebo Olufemi rallied to second position with 10 wins and two defeats plus 466 cumulative points after a win over a highly impressive Monday Christopher on Table 2 in round 12.
Coming on his heels was Khaleel Adedeji who recorded the same number of wins and defeats but dropped to the third position with inferior cumulative points of 370.
The impressive Dynamite Warriors’ engine room also revved up to snatch the intermediate category title.
Other players in the top 20 which included former African champion Jimoh Saheed, John Aiyedun, and Opeyemi Oloro received various cash prizes for their efforts.
In other spot prizes won, Bukunmi Afolayan picked the Best Female title while Philip Akhabue was rewarded with a complete scrabble kit as the youngest player.
David Ogedengbe got a surprise cash gift from the organizers for putting on a green and white shirt in commemoration of the 62nd Independence Day Anniversary.
Speaking at the tournament which was held in an atmosphere of conviviality, a trademark of the club’s events, Captain of Lekki Scrabble Club Ebikeme Adowei said the Lekki Scrabble Classics was able to tick some critical boxes due to the quality of minds who share the same vision with one another at the club.
“We are all commonly bonded in our passion for scrabble” he confessed, “and so we decided to have this periodic event, which is a bi-annual event so that we can gather the creme-de-la-creme of scrabble in Nigeria to compete, have fun and win prizes.”
“I’m glad we have this level of competition to offer scrabble players and we hope to sustain this. We are hoping that corporate organizations will key into this initiative to grow the game of scrabble not only football, and basketball but mental sports like scrabble and chess.”
Share