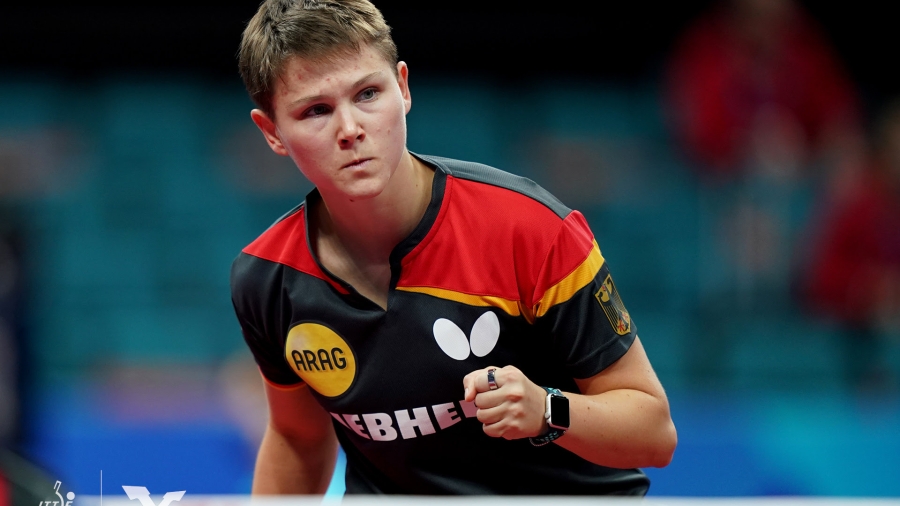 Germany and India alongside Chinese Taipei and Portugal secured places in the main draw of the women’s event at the 2022 ITTF World Team Table Tennis Championships Finals Presented by China Telecom on Monday 3rd October.

Maintaining their unbeaten record, fielding the trio of Han Ying, Nina Mittelham, and Shan Xiaona, Germany, the no.5 seeds, recorded a 3-0 win against the Czech Republic to bring their first stage matches to a conclusion; soon after, in the same group, India posted a 3-1 win in opposition to Egypt.

“We have achieved our goal to be the first in the group”, explained Nina Mittelham.

The third position in the group was the lot of the Czech Republic, they must wait to hear their fate. In both the men’s and women’s events, first and second places gain main draw entry; the remaining places are taken by the third-placed teams with the highest ITTF World Team Ranking as of September 2022.

In women’s Group 6, Chinese Taipei, the no.7 seeds, experienced a 3-2 defeat when facing Sweden. Tense moments, nerves were even more strained in the 3-2 reverse experienced by Romania, the no.6 seeds when opposing Portugal.

“We had pressure, it was the important match to decide who would pass the group safely,” reflected Matos. “I think my team managed the pressure very well, they are amazing.”

The end result was that Chinese Taipei and Portugal each concluded the group stage with five points and thus advanced to the main draw. Romania and Sweden finished with four points apiece. Two teams level, the result when they faced each other decides the outcome. Earlier Chinese Taipei had beaten Portugal and thus gained group first place, and Romania had overcome Sweden, thus reserving the third spot; for Sweden, the end of the road, and for Romania progress hangs in the balance.

In the men’s event, however, Chinese Taipei suffered a third consecutive loss. Singapore defeated the no.7 seeds and 2014 bronze medallist 3-1.

“For the last 16 draws, if we don’t take China, we’ll be happy”, reflected Cédric Nuytinck. “Sweden has also a strong team; they have very good players and they’re very dangerous.”

China’s women’s team, the top seeds, recorded a 3-0 against the United States. Japan overcame Hungary 3-0 to maintain their unblemished record, earlier Hong Kong had recorded the same margin of victory against Brazil. Puerto Rico secured a 3-0 win against Canada and stands next in line to China; Japan having played one match less is in the second spot behind Slovakia.

Similarly in the men’s event there was no stopping China, the top seeds, a 3-0 success was the end result against Slovenia, a team that showed inspired innovation. Andreja Ojstersek Urh, the only woman in charge of a men’s team in Chengdu and very much the mentor of Darko Jorgic, was unable to be present in person but was very much present in spirit. A special tablet with a video connection was erected in front of the bench, so she was able to offer advice.

Winning ways continuing; for Germany, it was back to winning ways, the no.2 seeds; they recorded a 3-1 win against France; in the same group India added a third victory by recording a 3-2 against a spirited Kazakhstan outfit. France now meets India; Germany opposes Uzbekistan to bring play in the group to a close.

Japan, the no.3 seeds and the Republic of Korea, the no.4 seeds, recorded 3-1 wins against Hong Kong, and Egypt respectively.

Defeats for Hong Kong and Egypt but both currently occupy second places; Egypt being level on points with the Czech Republic, who they meet in their concluding contest. Hong Kong meets Romania, Japan faces Hungary, the Republic of Korea confronts Saudi Arabia.

Meanwhile for Sweden and Portugal, both teams unbeaten, it was a day of rest; in the concluding group contests, Sweden meets Poland, also unbeaten; Portugal faces Denmark, in the corresponding contest Brazil confronts Slovakia.

The group stage matches conclude on Tuesday 4th October, the day on which the draw for the knock-out phase will be conducted.

From 30 September to 9 October, the 2022 ITTF World Team Table Tennis Championships Finals Chengdu Presented by China Telecom see top players of 60 teams face off to win two of the sport’s most coveted prizes; the Swaythling and Corbillon Cups.